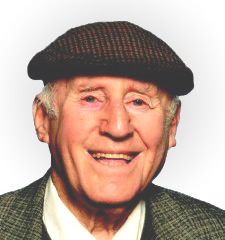 Norman Issacson was born in Cape Town on September 16 1921. In his day, Normie was an amateur wrestler, a bodybuilder and the first physical training teacher at Herzlia School.

Normie was a phenomenon who served the Green and Sea Point Hebrew Congregation for over 47 years, yet remained a man without an enemy.

His prodigious memory for names is without equal, his ability to fraternize with all strata of society; his devotion to duty, impish sense of humour- as well as his sermonic interjections- endeared him to all and sundry. There must be very few individuals of Normie’s age who were in full time employment while commanding respect from all sectors of the community, including the Rabbis who would often seek advice on procedural aspects of the liturgy and service.

He was truly unique. A husband who nursed his wife through illness and lost two children- one in Thailand’s Tsunami of 2004. Through it all, Normie maintained his faith and good cheer and concern for all God’s people and creatures. For decades, each morning he would enter the Marais Road Shul before 6:00 and chant King David’s Psalms, together with Neville Scher. While never focusing on his own pain, he demonstrated remarkable sensitivity to anyone else’s misfortune and it wasn’t unusual to see tears springing from his eyes when faced with someone else’s challenge.

In 2012, over the course of Normie’s 90th year, our Shul committed to writing a Torah in his honour, in fact completing it before his 91st birthday. Over 1000 people crowded the streets for a welcoming parade and service in the Shul- thus fulfilling the promise reserved for the greats, “olamcha tireh bechayecha”- one seldom experiences such appreciation in their lifetime.

Sadly, on the 20 September 2013 Normie passed away. That Sunday the multitudes once again filled the Marais Road Shul for Normie- but to bid farewell. In a service, seldom if ever witnessed in Cape Town, Nochum ben Moshe Isaacson’s coffin was brought into the Shul – the home he so passionately loved, lived, and served. And we – young and old, famous and ordinary, Rabbis and laypeople – we, said goodbye to an icon of our time; a true giant.

Yehi zichro baruch, may his righteous memory serve as a blessing to all who invoke it.

« Back to Religious Leaders