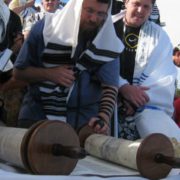 The World’s Fair opened in Flushing Park. “I Wanna Hold Your Hand,” by some long-haired kids from Liverpool, was #1. Some far-out location called Vietnam dominated the news. The Mets played their first game at Shea Stadium.

Life was good, I recall. Lots of friends, loving parents, Leave it to Beaver, and an older brother to show me the ropes. What could be bad?

I suppose that in my own naive way, I was decidedly unaware that there was anything special or distinctive about being a child of Holocaust survivors. Everything seemed so very normal. In fact, it was.

As it turns out, many of my baby boomer friends were of similar ilk. Their parents had also either spent years in concentration camps or had barely escaped the clutches of catastrophe on more than one occasion, and lived to tell about it. But looking back, I find it odd that we were all so oblivious to our unique lineage. And I guess that’s how our folks really wanted it to be. Despite having spent over 3 years in the torture cavities of Puskow, Mielec, Wieliczka, Flossenberg, Leitmeritz, Dachau, and Kaufering, my father, of blessed memory, never ever uttered a single word to us about the butchery and carnage he witnessed there daily. It was as if life on this planet somehow began in 1947 — when he arrived on Ellis Island.

It’s not like we didn’t know that “something” dreadful had happened. We saw the “KL” that had been eternalized on his wrist, we knew about the huge bump he carried beneath his black, shiny yarmulke, and we cried when we were awoken by his terrifying nocturnal screams and tremors. Oh, we knew. But the horror was just too ghastly to verbalize. The “pink elephant” could not be spoken about. The children had to be protected.

Until the summer of 1964. Like every year, I was safely ensconced at summer camp when I received a letter from home. This itself was a rather common occurrence in the pre-email decade of the 60’s. After the usual maternal exhortations to wear a sweater at night and eat my veggies, Daddy would customarily add a few obligatory greetings in his loving, broken English. But this letter was different. No message from Daddy. He would never say very much anyway, but I always looked for his unfinished, yet ever so sincere message of missing me and loving me. It wasn’t there. At 12 years old, that struck a chord.

When I couldn’t speak to Daddy on my weekly call home, an explanation had to be tendered. “Oh,” Mom stumbled, “he went to Israel to attend your cousin’s wedding.”

Plausible enough. But not for 1964…I knew it didn’t smell right, but hey, I was only 12. So it remained a minor mystery tempered somewhat by Daddy’s return home two weeks later, armed with wedding pictures, a silver candelabra for Mommy and Jerusalem trinkets for the boys. Perhaps I was wrong.

Fast forward nearly 40 years. Daddy is with us but in spirit and memory now, and big brother Izzy has grown fascinated with Daddy’s earlier years. And he found answers. The “research” is ongoing and more answers may be forthcoming, but the mystery of 1964 is no longer. A short time ago he received a correspondence from the Provincial Court of Bochum, Germany. In it was a transcript dated July 21, 1964. It was Daddy’s verbatim testimony at a trial for Nazi War Criminals.

Daddy then identified Nazis, unfamiliar to most: Johann, Labitzke, Rouenhoff, Bornhold, Brock. It seems that all of them must have been on trial. I trembled as I read on. I can hear his gentle voice speaking.

“The prison cell was so overcrowded that we had no room to stretch out at night.

…I saw these SS people from Puskow approach the sick Jews and stand near them. Then I heard Hamann calling out “fire,” and the SS men fired. The 8 to 10 sick Jews were shot to death.”

…”I am the only survivor of those sent to the Puskow Labor Camp.”

And with that, Daddy’s testimony ended.

My understanding is that these Gestapo thugs all received sentences of life imprisonment. Whether they actually served them full term is unknown to me.

Daddy, I have spent many adult years wondering what really happened to you before 1947. But looking back now, and knowing that I am now privy to but a speck of the terror you lived through, I say thank you. Your loving shield was a blanket of normalcy for two little boys who love you now, even more than we ever did.

Life was good, I recall.

You made it that way.

Funny how none of the articles about the murder of Dahlia Lemkus who was stabbed near Alon Shvut last night speak about Dahlia or her family, how no reporter had the curiosity to find out about her. She was killed in the afternoon so the reporters had all evening to question their contacts in Tekoa.

Instead, they practice a kind of obscurantism, restricting our knowledge of the victim. (Curious that the word obscurantism is derived from a dispute between intellectuals and the German monks who wanted to burn Jewish books, like the Talmud, in the 16th century to obscure Jewish culture and learning.) In the New York Times, the reporter tells you about the terrorist who is from Hebron, how he was in an Israeli jail for five years for a firebombing. The reporter quotes his Facebook page: “I’ll be a thorn in the gullet of the Zionist project to Judaize Jerusalem.” We learn nothing about 26 year old Dahlia, who was just getting started in life after finishing college, studying occupational therapy so that she could have a job where she could help people who were sick or infirm or disabled to live in a fuller way.

They don’t care that Dahlia’s father Nachum drives the ambulance in Tekoa. Day and night he is called on to make the drive to Jerusalem, and that Dahlia’s mother cares tenderly for the elderly.

You will never learn from the articles that, when a neighbour had to go to the hospital with a sick child, Dahlia stayed with the other young children all night and insisted that they not pay her. The articles would never tell you that she was the one who cooked the food for her brother Haggai’s bar mitzvah a month ago, fried fish, salad and pancakes.

No, they don’t want you to know what a kind, giving, loving young woman she was on the cusp of her adult life, looking towards marriage and creating her own family. Instead the newspapers show a photo of the terrorist and tell us that the Palestinian leadership says that it is normal and natural to run over a young woman and then stab her to death so that her blood runs like a red cape into the street. Normal and natural. An act of resistance. When the Palestinian leadership calls for their people to take a knife and find Jews to murder, and calls it natural and normal, we have entered the realm of unadulterated evil. Dahlia embodied its opposite and that fact shouldn’t be obscured from the world.