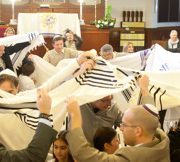 “And (the sons of Aaron) died, and Aaron remained silent,” the Parsha.

It was a Reader’s Digest article I must have read twenty-five years ago. About a lady who had just lost her mother, her husband was on his way home from a trip; she alone had to break the news to her little children. People were calling up offering condolences: ending with the expected (awkward?) “don’t hesitate to call me if you need anything.” In the middle of it all the doorbell rang. Her husband’s friend was standing at the door with a rolled newspaper under his arm. I’ve come to shine your shoes, he announced.

“What?” was her dazed reply.

“I’ve come to shine your shoes,” he repeated. “I remember at my mother’s funeral the family was so busy, and the shock and all that we didn’t realize our shoes weren’t shined until we got to the funeral home.”

As he spread the newspaper over the floor and began scraping the soles of everyone’s shoes and polishing the uppers, the woman’s pent up sorrow and shock gratefully gave way to torrents of tears. His simple act had helped her through.

Sometimes silence is the most eloquent and heartfelt expression. Your silent presence is a gift that requires no explanation: gold that need not be gilded with distracting words. And the space formed by silence can be filled with simple acts: shoe shining (in a kup-in-galoshin environ) that pave a way from one heart to another, from a Jew to her Torah, from a man to his Creator.

For the mourners themselves: if you can’t express your feelings, if you feel cheated all over again this time because of the emotions sending you on this nightmare, if this all makes no sense — you don’t need to say anything. Silence gives credence to everything going on inside of you. It allows a rebuilding, a renewal inside of you. And that renewal, that rebuilding is the best consolation we have until Moshiach intervenes.

with thanks to chabad.org

In recently read a report which focused on the nature of evil. The report stated that, for the most part, those guilty of the most heinous violent crimes tend to fit an otherwise “average” description. Time and again, the neighbours of a mass murderer were shocked to find that the “nice guy who lived next door” had committed such despicable acts. The article reported that they generally acted like “good” people, and it was their evil activity which was the exception!

The report concluded that all of us combine good and bad traits, and while certain circumstances may cause individuals to go beyond the bounds of normal behaviour, there is no basis to assert that these people are “totally evil.”

Indeed, as comfortable as it may be to categorize certain people as monstrous, cruel villains, the Torah does not paint such a reality. Even the worst evildoers can be portrayed as capable of doing much good. Perhaps the most striking example can be found in this week’s Torah portion, Toldot.

Much of the Parsha describes the struggle between Jacob and his twin brother Esav. Esav is described as a violent “man of the field,” who heads a cruel gang of 400 men. He murders many people – and even plans to murder his brother Jacob (after Jacob received their father’s blessing). In addition, Esav is portrayed as “playing the field” – i.e. dallying in all forms of sexual licentiousness. Given all these factors, it is no surprise that Jewish tradition sees Esav as a “rasha,” an evil person.

But Jewish tradition also sees Esav in another light. The famous Talmudic sage, Rabbi Shimon ben Gamliel, was known for the great care he took in fulfilling the Mitzvah of honouring one’s parents. Yet he stated: “I served my father faithfully all my life, yet I did not even reach the smallest level of honour with which Esav served his father Isaac.”

In fact, Jewish tradition states that perhaps no one in history was more scrupulous in tending to his parents’ needs than Esav. The Midrash notes how quick and eager Esav was to fulfill all his father’s requests, even wearing a set of royal clothing whenever going to help his father. Apparently the care with which Esav took in honouring his parents – one of the Ten Commandments – was a key reason for Isaac to believe that Esav, not Jacob, should be the heir to Jewish leadership.

Jacob recognizes this greatness in his brother Esav as well. After fleeing from Esav (who is intent on murdering him), Jacob stays in Syria for almost two decades. He is afraid to return to Israel to face Esav. Why is Jacob so afraid? Not only because of the physical danger posed by Esav’s murderous gang, but also because of the spiritual elevation that Esav possessed due to the mitzvah of honouring parents!

Yet despite this, Jewish tradition still refers to Esav as “the Evil One.” His murderous deeds and sexual dalliances cannot be excused just because he excels in one particular Mitzvah. On the other hand, the Torah clearly wants us to recognize that ultimately, people do not fit into neat, black-or-white categories.

with thanks to Aish.com